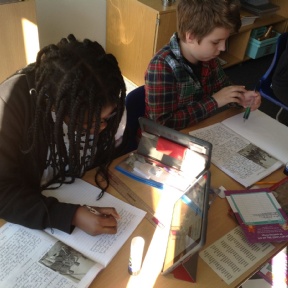 On Friday 19 March, we took part in Let’s Count Day to learn more about the Census that takes place on Sunday 21 March 2021. This followed the David Olusoga live lesson on Equality, Representation and Diversity which we took part in during remote learning. Census, which is a set of questions about your household, takes place every 10 years and it helps to inform the government about important issues such as where to build schools and hospitals. Classes learnt about different jobs that people had throughout time, which we know about as they were identified in the Census. Pupils used Census data and maps of Enfield to plan their own towns, thinking about what the needs of the people in the town would be based on the data. Let's Count Day helped pupils to understand the importance of Census, their place within history and the importance of equality. Pupils in year 3 and 4 are really excited to be counted in their very first Census this year!

This is what the pupils had to say about the day:

"Today I’ve learnt that equality is the key to our lives and that we should treat people with fairness and respect." (Ozan, Berners-Lee)

"I found the Census lesson really interesting because I hadn’t given much thought to how governments plan for transport and schools in the future based on the information the census provides." (Ernest, Lennox)

"I am school parliament member, people in my class come to me to make sure their voice is heard, I tell Helen their opinions. This is like the census."(Leticia, Mackintosh)

"The census is important as it tells us about how life has changed over the last 10 years and what we need to plan for future generations." (Elvire, Fitzgerald)

"I really enjoyed creating and planning my own version of Enfield (town) for the next ten years - I hope to be an architect and city planner in the future!"(Kevin, Fitzgerald)

Overall, today has enabled the children to understand that they will be a part of history as they will be recorded in their first census. They have thoroughly enjoyed learning what Census day means and how they count. (Year 4 teachers - Aleyna, Rebecca, Chloe)